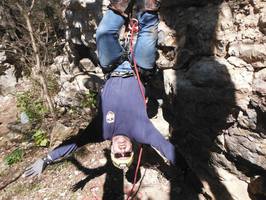 Ray is a paramedic engineer with the Victoria Fire Department. He has been involved in  Search and Rescue for many years. Starting out as a Swiftwater Technician, he has worked his way up t0 lead instructor and team leader.  He has certifications in FAST1, FAST2, RBO1, VRT1, VRT2, GSAR1, GSAR2. Ray is a lead instructor in FAST1,FAST2, RBO1,VRT1 and GSAR1. He was the Swiftwater Rescue Team lead for VFD and is also on the Technical Rescue Team. Ray has been vital in forming the Cuero EMS rescue team.

Ray is a prior U.S Marine and was Honorably Discharged after serving 8 years. Ray was previously an active member of the Texas State Guard, where he has been on several  SAR missions as a team leader and team medic.

Ray maintains his skills throughout the year by attending classes and training sessions, which sometimes become real-life rescues. One lucky piglet was saved by his recent adventures.

In all seriousness, Ray is passionate about sharing his expertise and knowledge with anyone interested in learning different survival and rescue skills.